Northumberlandia: A face appears in the landscape

Watch this short BBC news clip about a country park which will be opening next year in Northumberland and answer the questions about it. The activity is suitable for intermediate students.

You can watch the clip by double clicking on the BBC link or on the picture below. 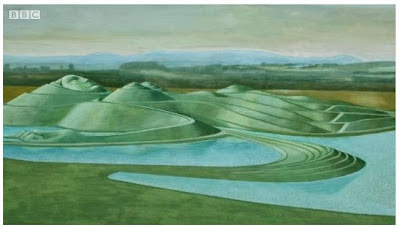 1 What mineral is extracted from the mine where the park is being built?
2 What makes the figure unique?
3 What does the figure represent?
4 Which two specific activities are mentioned that locals will be able to enjoy in the park?
5 What's the main difficulty in building a figure this size?
6 Five locals give their opinion of Northumberlandia. How many of them mention "The Angel of the North"?

To check your answers you can read the transcript below.

This near Cramlington in Northumberland is the largest open cast mine in the country. It’s expected to yield some five and a half million tons of coal. And this is Northumberlandia, created from the leftovers of the mine and carved here by the man who mined the coal. It’s the largest replica of a human body ever seen on the planet, of a reclining female form a quarter of a mile long. When the country park opens a year from now, there will be four miles of paths all over this figure with a number of lakes around its base.
There's things which have been revealed about this project that even we, as part of the project team didn’t realize. In particular, the spectacular views that you can enjoy from the high points on it and the joy of exploring Northumberlandia by walking on the different paths and taking a different route each time you come here. So we think it’s going to be a really special place for people to come and enjoy.
The landowners, Lord Ridley’s Blagdon Estates, are equally enthusiastic.
We believe that it’ll draw people to Northumberland, we also believe it will be a great facility for the local people to enjoy, be it walking or just picnicking. From the Estates’ point of view to be able to leave a legacy like this is really quite a special occasion.
From the curve of her hip to the nose and its cheek Northumberlandia mimics the undulating landscape around her. Her sheer size has surpassed even the expectations of the man brought in to design her, celebrated landscape artist Charles Jencks.
It’s much bigger than I ever thought, and if you put anything in a big scale like this it disappears, you have to make a really bold gesture and accentuate, you know, exaggerate the lips, for instance. We are all attracted to the face. We have more neurons to identify other people than any other parts of our brain. So it’s the face that attracts you.
"I like it, but I think people who didn’t know about wouldn’t have any idea what it was unless they knew about because it looks like a lump of shrawns."
"Well I just said if you can see it from the air but it’s a lady-like, funny, no clothes on."
"I kind of think it looks good on."
"It’s like the angel of the north, isn’t it? It’s something that people (…), it’s something like… come and have a look."
"We didn’t like the angel when it first went up, did we? And that was part of the north east."
The north’s latest and biggest work of public art has perhaps done something to improve the image of open cast mining, and should be around for many generations to come.
Serena Shaggot BBC York North Cramlington.
Publicado por coordinacion.thats.eoi1z@gmail.com en 0:00