Why is English weather so predictable

In March this year, Dr Helen Czerski explained what makes the UK's weather so changeable and unpredictable, especially in winters, in the BBC programme Orbit: Earth's Extraordinary Journey.

Self-study activity:
Watch the clip by clicking on the picture below or on the link above and say whether these statements are true or false. 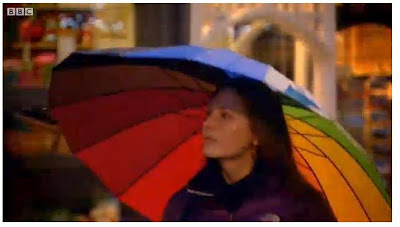 The British winter is notoriously unpredictable. Sometimes cold and dry, sometimes mild and wet. This unpredictability is a consequence of the Earth's rotation. The key factor is Britain's location. We sit underneath the boundary between two of the Earth's climate cells. This means that above our heads, there's a battle going on between two different types of air.

I’m going to draw a map to show you. This is the south coast, and Scotland is up here, and we are down here in Cornwall, and Ireland is out here. Up here to the north of us there’s cold polar air and down on this side to the south is warm air that’s come from the tropics and the boundary between the two can aerate over the British Isles and what’s going on above our heads is a clash of the cold air and the warm air. And it’s whether they are pushing against each other and mixing it up that we get this changeable, messy weather that we love to complain about.

In December 2011, we saw this battle in action. A succession of storms battered the country as warm and cold air struggled for supremacy above our heads. But there's a further factor that influences the outcome of this battle between warm and cold air. The boundary between the cells can move.
This movement can be affected by a phenomenon that's generated right at the boundary between the cells. And it's a product of the Earth's spin. Right at the boundary, high up in the sky, a wind blows about 10 kilometres up. It's really, really fast. It can travel at speeds of up to 450 kilometres per hour. It coils all the way around the planet, at about our latitude, and we call it the jet stream. The jet stream is crucial because it influences the boundaries between the cells, and therefore between cold air to the north and warm air to the south

You can see the significance of this by looking at the weather 12 months earlier, in December 2010. The whole country shivered under a blanket of snow and ice. It was one of the coldest winters since records began. The reason was that the jet stream had developed a kink. Over the Atlantic, it sat much further north, near the Arctic. Then it swung down over Britain. This temporarily shifted the boundary between the cells and brought cold, polar air across the whole country

Unfortunately for our weather forecasters, it's particularly difficult to predict the meanderings of the jet stream.

The spin of the Earth makes the weather here in the UK unusually changeable, and particularly hard to predict. The fact that you wake up every morning and the atmosphere surprises you, just adds to the spice of life.