Big Cat Hunter is another report in the BBC's Real Time video series. Jonathan McGowan, a naturalist from Bournemouth, tells us about the existence of big cats in the UK.

The activity is suitable for strong intermediate students. 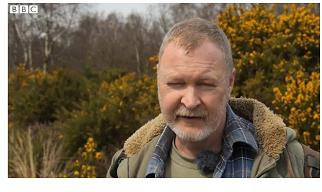 Watch the video through. What animals does Jonathan mention?

Watch the video again and answer these questions.

To check the answers, you can read the transcript below.

We have puma, I can smell cat spray, we have leopards, and we have linx.
Interesting.
The numbers have escalated.
Looks like it.
We have so many. We have thousands of sightings a year by members of the public. This is one of my newest study areas where a lot of people have seen large black cats.
It all started with me in 1984 because I was into watching wildlife. And I got more than I bargained for. Once when I was watching a badger set, saw a puma come along and stalk one of the badgers that I actually knew quite well, and I couldn’t believe it. And so it set me on a sort of a task to find out whether there were any more of these animals in the area. I thought I’ve got to do a proper study about this and so that’s what I’ve been doing for the last 12 years now.
I’ve got some possible leopard scat here. It’s full of hair, that’s a typical find within a leopard territory. I collect lots of evidence in regards to field science, that’s droppings, footprints, scrapes from the ground and claw markings on trees.
You see, claw marks here because when cats often do scraps they often put their claws out to make the ground up.
These are all my hundreds of bags of hair I’ve collected. A very small amount of it has been analysed, yes, and some of it has proven to be puma, leopard hair. I’ve got whiskers as well. That’s possibly a whisker from a large cat. Cats have huge big whiskers like this. We have deer bones that fall out of trees because leopards often take their kills up trees just to prevent foxes from eating them. Big jaws have crunched the bones. This is a leopard skull here, just to show the teeth and how strong those jaws are.
This is one of my many trigger cameras. I’m gonna open it up and see wether there’s actually anything on there. In actual fact, it hasn’t been triggered yet at all, so I’ll put it back and I’ll return in a few weeks time.
This is one of the images I obtained. It was taken about three am, and one can clearly see there’s an animal there which I believe to be the male leopard that will often visit this pond to drink.
Every week I get reports some of which are ‘cat seen by multiple witnesses’ or cat seen by several people in different vehicles, for example in a traffic jam. It’s good just to speak to the witnesses just to relax them and let them know they are not unique, they are not mad.
People are skeptical because big cats are iconic. People think that Britain is so cold and rainy and boring that we couldn’t have big animals like leopards and pumas here.
Once you start looking for the evidence, it all falls into place. This is quite interesting here. They keep themselves to themselves, and they don’t want to touch humans, they just want to get up and get out of the way if they know humans are near.
To me it’s such a wonderful part of nature, and I feel part of nature when I see that shy elusive animal watching me. It does something which is really hard to explain, and it makes it more passionate, and you just want to be part of it.
Publicado por coordinacion.thats.eoi1z@gmail.com en 0:00