Read this BBC article and choose the world or phrase A-N that best fits into each gap. There are three words you do not need to use.  0 is an example.


But some residents in the Royal Borough have reacted (4) … to the extreme measure.  Many complained they were unattractive, (5) … others said the number of parking spaces had been reduced (6) … . Shami Kalra (7) … it was "sad" to see the "beautiful streets of Windsor" lined with anti-terrorism barriers, and gave the impression the town was "running scared". One woman living in the town commented the "ugly barriers" had been installed with "two hours notice" and tweeted: "If it's not safe to change the guard. Don't do it. The barriers severely impact people (8) … live there."

Thames Valley Police believe the measures are proportionate and necessary (9) … there is "no intelligence to indicate a specific threat to Windsor". The barriers will be in addition to the normal road closures which had (10) … been arranged for the Changing of the Guard event. 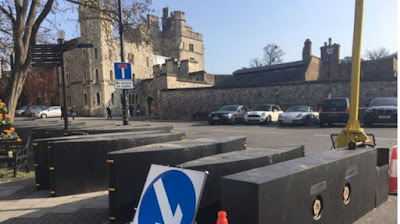