How has the immigration changed Britain?

To a large extent, today's video clip is the other side of the coin, and shows the way nationals feel about immigrants, especially in this age and time of economic crisis.

We have also changed countries. This time is Britain where BBC's Political Editor Nick Robinson visits Peterborough to find out how immigration has changed the country. The former market town in Cambridgeshire, now a city, used to be "very English and very white", he says, but in the last decade 24,000 immigrants have arrived.

Self-study activity:
Watch the video by clicking on the picture below or on this link and answer the questions about it.

The activity is suitable for intermediate students. 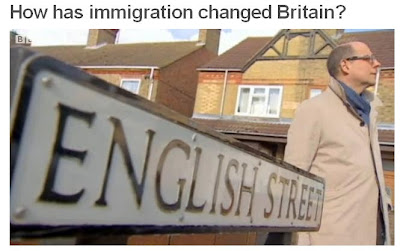 1 What is the ratio of immigrants in Peterborough?
2  What are people telling British politicians?
3 What is the problem with some schools, according to the man in the shop?
4 Why doesn't this shopkeeper's father go into town any more?
5 How long has the customer at the shop been living in the city?
6 What is the percentage of people who think immigration is too high?
7 According to Karem, what is the main problem with immigrants now?
8 What makes immigration different now from some decades ago?
9 What are Poles well-known for?
10 Why isn't essential for Polish immigrants to know the English language any more?
11 What does political leader Marco Cereste compare immigration to?
12 What does 'a fifth of the population' refer to? And 'a tenth of households'?

You can check the answers by reading the transcript below.

This is how much of the country used to look: A typical market, a typical town, so very British, so very white. Not anymore. The face of Britain is changing, and nowhere more so than here, in Peterborough. In the last decade in this city 24,000 immigrants have moved in, that’s more than one in eighth of the population.
Over the past decade more than a million Eastern Europeans came to Britain and stayed. Now politicians are competing to say that the country is no longer open to all comers. They are listening to the voices of those who are telling them that their towns, their cities, their lives have changed.
I’ll be honest. I want to move out of Peterborough. Surely give my son a fair chance in schools because obviously, you know, everyone’s talented about education but locally there’s so many that the classes will get bigger and therefore one or two schools English isn’t the first language.

So what is it? Is it the scale?
It’s the scale, it’s just such a massive, massive change, and lots of people, my father, very rarely comes into this town or his wife because they don’t feel safe.
They feel uncomfortable?
Uncomfortable, don’t feel safe because obviously you don’t know what, obviously when they talk in their native tongue. You don’t know what they are rabbiting.
Oh, have you got a customer?
There’s one hiding there.
How long have you been living here?
In here? I’ve been yesterday. Yesterday eleven.
No, I said how long you’ve lived in the city?
In the city? One day.
Ian is very, very far from being alone. About three quarters of people tell pollsters they think immigration is too high, and more than half of those say we think immigration should be cut by a lot. That’s been true for a long time but something has changed in the last few years. The number of people who say that the impact of immigration is very bad has almost doubled. Interestingly, that’s a view shared by first and second generation immigrants.
The new arrivals are not integrating as well. There’s ghetto situations. Karam’s father came from the Punjab to Peterborough to set up this store.
How different would he think Peterborough was now to what it was then?
I think he’d be shocked.
Really? Because?
Yeah, I think so, I mean he was a very proud man who was a British and when he came out here and embraced Britain as his country.
Do you see the irony in this?
I do.
You’re a Seikh?
You see, the problem with the immigrants they don’t mix in. That is probably in a nutshell.
Here in East Anglia thousands of Eastern Europeans work on the land, picking fruit and vegs and flowers, people Steve believes have helped locals like him in their jobs.
People say, no, we haven’t got space for them, there’s no room here. There are no jobs here.
There is, there is. There’s plenty of room. We’ll always fit them in.
Imagine somebody says, one of your customers, my kid, my son, my grandson can’t get a job because there’s some Polish bloke taken it or Lithuanian. What would you say to them?
Try somewhere else, work harder.
For decades the whole question of immigration was inextricably linked with race, which is why mainstream politicians were so terrified of the subject. But now that the new influx of immigrants are white and from Europe, that link’s largely been broken, but the pressure is still on the politicians because there are questions of integration and questions of whether the country is simply too full.
So this is a Polish paper from here?
Poles are known here for being hard workers, doing the jobs many others simply won’t do. They’re also known though for keeping themselves to themselves.
We are Polish, aren’t we? So that’s why people are coming here, especially Polish people which are not speaking English.
But I guess forty, fifty years ago maybe new arrivals in Britain thought ‘we have to learn English then we can fit in’?
Yeah, now we don’t have to really because if you’ve got some problems you can always come into the Polish shop.
Come to the shop.
This city is already successfully absorbed many waves of immigrants, including thousands of Italians, one of whom is now Peterborough’s political leader.
My sense is you’re a kind of a big optimist about immigrants whereas I might affix you not to be.
Ok, in my view, it’s a glass that is half full or half empty. Now we can’t stop immigration coming to the city. As a councilor, as an administration I can’t stop people coming in. So what do you do? You either say they are a huge problem and we want them to go away, or you say, well they’re gonna come anyway, so let’s make the very, very best of it.
Italians, Poles, Africans, Asians, a fifth of the population of this city were born abroad, a tenth of households speak no English. Now the opinion polls are clearly telling politicians that people want that flow to stop or at least to slow down. Perhaps though people are as concerned about integration as they are about immigration because in truth most people know that Britain is not simply going to go back to the way once was.
Publicado por coordinacion.thats.eoi1z@gmail.com en 0:00