This week's reading test is based on the Telegraph article Stress pushing teachers to leave profession,' figures show published in March this year.

(0) Growing stress is the leading reason (1) … teachers taking time off work or leaving the profession entirely, new data has revealed.
In fact, stress (2) … more than double the figures of days taken off for sickness, numbers from an insurance firm specialising in covering schools against members of staff being off work showed.
The analysis of its claims showed that 55 per cent its 1,800 schools made stress-related claims in 2014. It also revealed academies experienced the highest proportion of lost teaching days (3) … stress.
“Stress in teachers is caused largely by heavy workload, a particularly pressurized (4) …, tight workforces and additional pressures not directly related to teaching like Ofsted inspections,” said the firm’s Harry Cramer.
(5) … the company's analysis of 138,500 absence days taken by 31,900 staff within the education sector, 3.5 per cent of school staff take a stress related absence every year. The (6) … length of a stress related absence is 26.9 working days, over twice the length of an average staff absence which is 13 working days. The analysis was commissioned by the BBC Radio 4’s File on 4.
Separately, a preliminary online (7) … of 3,500 members of the NASUWT teachers’ union revealed stress and poor mental health. It found 67 per cent of teachers said their job was having an (8) … effect on their mental health.
The report, (9) … is to be published at the union’s annual conference over Easter, found 76 per cent of teachers said they are “seriously considering” leaving their job in the last year, compared to 69 per cent in 2014. Separately, 68 per cent said they considered leaving the profession entirely.
Other (10) … findings include:
• 83 per cent have experienced more workplace stress in the last year, compared to 80 per cent in 2014
• 84 per cent say their job has impacted negatively on their health and wellbeing in the last 12 months; compared to 80 per cent in 2014
• 78 per cent have experienced work related anxiousness, 84 per cent (11) … of sleep, 33 per cent poor health, 25 per cent (12) … use of caffeine, alcohol or tobacco, 11 per cent relationship breakdown and nearly 2 per cent self-harm 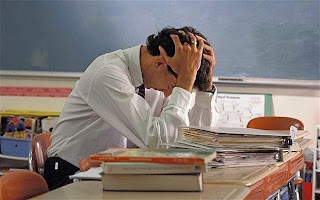 Photo: Alamy in the Telegraph