This week's talking point is news. Before getting together with the members of your conversation group, go over the questions below so that ideas flow more easily when you meet up with your friends and you can work out vocabulary problems beforehand.
To illustrate the point you can watch this Time Magazine interview with Larry King. 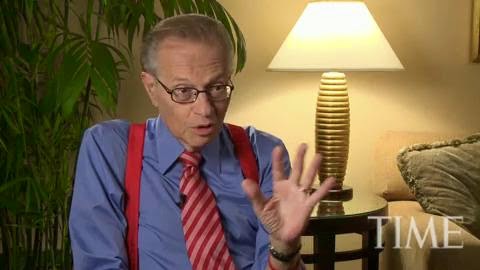 I’m Gilbert Cruz with Time.com and I’m here with Larry King host of CNN’s long running Larry King Life and author of the new memoir My Remarkable Journey. Thanks for being with us today.
My pleasure, Gilbert.
What has allowed you to last this long in the job? And do you still enjoy doing it?
I still very much enjoy it and longevity is impossible to explain. I’m doing what I always wanted to do. I never wanted to do anything else but be a broadcaster. I'm talking about age 5. I would listen to the radio and imitate the radio announcers. But I never thought … I never thought I'd be seen worldwide. So all of this is … a dream come true. We almost called the book What Am I Doing Here? I still, I still pinch myself.
Do you agree with the perception that sometimes you avoid asking difficult questions?
Don't agree with it. What I … I'm not there to pin someone to the wall. I try to ask perceptive questions, thoughtful questions that get at an arrival of what that person is, how they are and what they bring forth. If I were to begin an interview with, ah, Nancy Pelosi and say, "Why did you lie about the torture things you learnt?" the last thing I will learn is the truth. Of course, what am I doing? I’m putting them on the defensive, purposely, to make me look good. Nothing to do with them, they’re a prop. At that point, they're a prop. Well, to me, the guest is not a prop.
Are you still learning, ah, how to interview people? Or do you have that down – the technique?
That I think I have down. I think I know how to interview people, I’ve done it for so long. It’s who, what, when, where, why. It’s in what order you put ‘em. What you want is a good interview subject. If you’ve got a subject who is, ah, passionate, who has the ability to explain what they do, very well. Who has a sense of humour, hopefully self-depreciating, and a little bit of a chip on their shoulder. You’ve got those four things, don’t matter, president, plumber, architect, singer … you got those four things, no one will click off.
Are you at all concerned at the popularity of ideologically-charged news programs? Programs where the, ah, host is someone who injects a lot of themselves into … ?
I'm not personally concerned, because I know that all things are cyclical. There’s a wave, it comes in, then it goes out. Hopefully, the good, straight, interview - in-depth, thoughtful, listening to the answer, the guest counts - will always be around. So I’m not a fan of the ideological-based show, right or left, because I don’t learn anything. There's something I learned long ago: I never learned a thing when I was talking. I never learned a thing when I was talking. So these shows in which the host is on 90% of the time and the guests 10%, I don't get it. But, I understand people like it. I wouldn’t do it.
How many pairs of suspenders do you actually have?
Never counted 'em. But my guess would be based on the suspenders in New York and in Washington and, of course, at my home …150. Much more ties. The one thing they have to have, they can't be clip-ons. They have to be buttons, over the buttons. So every pair of pants I buy, jeans, anything I buy - we sew in the suspender buttons. I’ve gotten very used to them. I like the feel, I like the way they wear, I like the, I like the look.
What do you think is the greatest challenge that media faces today?
The greatest challenge media faces today is new media. No one can predict tomorrow. The technology is ahead of the intellect. By that I mean … what I thought was fantastic was television – think of it! You and I can be seen around the world in a, in a minute. There’s satellites - what about satellites, how are we to top satellites?
And then guys walk around with little machines and they much ‘em and, and words appear! And you think … So, the new media is … everybody’s a journalist, everybody Twitters and they have websites and they send out … And, and the danger in it, the danger in it is real. When anyone’s a newsman … you get a lot of false stories, overreaction to stories, jumping on stories too quickly, no measuring … And the saddest part of it, is the decline of the newspaper. I love newspapers. In fact, as an aside, I was, ah, having my hair done today and Rupert Murdoch was in the next stall and we were talking. And of course, he loves newspapers and I love newspapers and he said that was … that’s another generation. And it’s sad.
Larry, our last question is from Felicite Osborne from New Rochelle, New York. And she asks: What does life after Larry King Live look like to you?
I don’t know. I don’t know. First, as Milton Berle said, "Retire? To what?" What would I do? I have no idea. I would do something. If I wasn’t at CNN, I’d do something in media. I’d volunteer to work for major league baseball.
That’s nice.
Cause baseball’s my favourite advocation. So I, I would volunteer to do something.
You work so much – you don’t relish, sort of, just, relaxing?
I’m not a relaxer. I’m not … no, no, no. Relax is not in my nomenclature. I, ah,I'm not a good sitter-arounder, if that's a term. It doesn't, it doesn’t suit me.