In today's listening activity we are going to find out information about one of the most iconic buildings in New York, the Chrysler Building.


Choose the option A, B or C which best completes each sentence.

3. For Frankie J Campione the Chrysler Building
A. inspired the automobile industry in the 1920’s and 30’s.
B. is a symbol of American industrialism.
C. preserves the idea of speed and excitement.

4. The Chrysler Building
A. is much more appreciated today than when it was built.
B. represented the 1930s tendency that buildings looked like the industry they were built for.
C. was well liked when it was built.

5. Charles Weiss
A. is an architect.
B. is still working.
C. lives in the Chrysler Building. 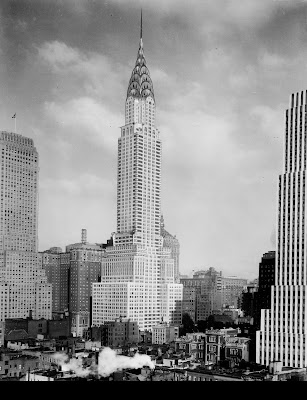 This year marks the 75th anniversary of the Chrysler Building, a landmark on the New York skyline. At the time of its opening in 1930, it overtook the Eiffel Tower as the world's tallest building, only to be overtaken by a New York rival, the Empire State Building, the following year.
The Chrysler Building, which was designed by maverick architect William Van Alen, was also striking for its futuristic structure. In order to find out how it had withstood the test of time, SPEAK UP went there and met with Frankie J Campione, whose Create Architecture Planning & Design company is based in impressive offices at the top of the tower:
I think after 75 years the building doesn't necessarily preserve the idea of speed and excitement, but it preserves the idea of American industry. The building was designed as the headquarters for Chrysler and throughout the building there are images that are prevalent that show inspiration from the automobile industry from the late 1920s and early 1930s. The building remains that same sort of icon that speaks to American industry: not so much speed and excitement, but American industrialism.
The Chrysler Building was considered ridiculous and discredited when it was first built because it was a folly, it was, by terms we now use, ‘entertainment architecture’. That is something that's new to architecture in the past 20 years. Back in the late 20s and early 30s, buildings did not necessarily resemble the industry that they were built for. However, by today's standards, it was considered very foresightful and ahead of its times.
The top of this skyscraper also houses the splendid offices of Charles Weiss, a 78-year-old dentist who has no plans to retire. We asked him why New Yorkers were so fond of the Chrysler Building:
You look at this tower at night when it's lit up and it's just so different and so beautiful, it's like a rocket shooting into the sky but, as much as New Yorkers like it — and it really is the icon building in New York City— all the years, there's just nothing like it. Overseas, it is New York City. I've been to Japan over 62 times, I've been all over the world teaching, you know, implant dentistry every time I pass a travel bureau, in any country, and they're saying "Go to New York," there's a picture of the Chrysler Building. It's the most famous building around the world: the Chrysler Building means New York to a whole lot of people.