Reading test: The ridiculous story of airline food and why so much ends up in landfill

In this week's reading test we are going to practise the multiple choice reading comprehension type of task. To do so, we are goint to use The Guardian's article The ridiculous story of airline food and why so much ends up in landfill.

Read the text and choose the option A, B or C which best completes each sentence.

You probably know about the waste problem in our oceans. But how about the one in our skies? Airline passengers generated 5.2m tonnes of waste in 2016, most of which went to landfill or incineration, the International Air Transport Association (IATA) estimates. That’s the weight of about 2.6m cars. And it’s a figure set to double over the next 15 years. Toilet waste is included in that statistic. But so are miniature wine bottles, half-eaten lunch trays, unused toothbrushes and other hallmarks of air travel.
The airline industry has taken criticsm for its growing greenhouse gas emissions as passenger numbers rise. But could its massive waste footprint be solved without affecting the sector’s growth? A Spanish project launched last autumn by a group of companies including Iberia Airlines and Ferrovial Services is taking up this challenge. The scheme aims to recover 80% of cabin waste coming into Madrid’s Barajas airport by mid-2020 through simple measures such as using trolleys designed for waste separation, says Juan Hermira, Iberia’s lead for the project. About 2,500 cabin crew members will be trained in the basics of waste separation as part of the push, he says.
It’s one of a handful of initiatives that suggest parts of the industry are waking up to waste. Last year, Gatwick opened an on-site waste-to-energy plant, reducing the need for lorries to transport waste elsewhere. The power produced currently goes back into the plant, but Gatwick hopes the facility will eventually help to heat the north terminal. Like Heathrow, it is also targeting a 70% recycling rate by 2020.
America’s United Airlines has switched to compostable paper cups and last year began donating unused amenity kits to homeless and women’s shelters – it expects to divert more than 27 tonnes-worth by the end of the first year. Virgin, meanwhile, has set up a system for recycling all parts of its headsets, including ear sponges, which are used as flooring for equestrian centres.
Despite actions like these, the mountains of airline waste continue to grow. So what more can be done? For Michael Gill, IATA’s head of environment, regulation is key. At the moment EU animal health legislation, drawn up as a reaction to diseases like foot and mouth, dictates that all catering waste arriving from outside EU borders be treated as high-risk and incinerated or buried in deep landfill. A coffee cup from the US, for example, will be treated as hazardous waste because it might have had milk in it. Donating uneaten food to charity is impossible. A more rational approach is needed, Gill says, one which identifies elements of cabin waste that actually pose a risk to health and takes into account the stringent hygiene standards airlines are already subject to. He points to a forthcoming IATA-commissioned report which concludes that dairy and honey in airline waste pose a negligible threat to animals.
Better procedures on the ground would also help ease the classification problem, says Magda Golebiewska, group environment manager at TUI Airlines. East Midlands and Gatwick airports have started tagging rubbish bags with their origin but elsewhere it’s common practice for waste from inside and outside the EU to get thrown together and processed collectively as international catering waste, she says.
Most important, however, is getting the cabin crew’s buy-in, says Golebiewska. This can be a challenge since the crew is already busy meeting on-board sales targets and looking after passengers, she says, but it is crucial: “How well the [waste] segregation is done really depends on how much effort they put into it.”
The environment is not the only concern on the minds of Golebiewska and others. Cabin waste costs the industry $500m (£400m) per year, according to IATA, a figure that it says is rising faster than waste volumes thanks to growing disposal costs. Bringing this down will require airlines to take a different approach to procurement, says Matt Rance. If they can be persuaded to focus on a product’s full life cost, rather than unit price, then investing in more durable headsets or blankets and ditching disposables starts to make sense, he says.


1. The waste airlines produce
A. does not only refer to food.
B. is all burnt.
C. is twice as much as it used to be 15 years ago.

2. The Spanish project launched last autumn
A. contemplates the separation of waste without any human intervention.
B. intends to separate waste on board.
C. is trying to reduce the airlines waste by limiting the sector’s growth.

3. In Britain
A. Gatwick Airport is planning to open a plant to recycle waste.
B. Heathrow Airport currently produces 70% of its power through recycled waste.
C. they are reducing road transportation of waste in some of the main airports.

4. In US
A. United Airlines cups can be used as fertilizers.
B. United Airlines donates uneaten food to homeless and women’s shelters.
C. Virgin recycles all parts of its headsets to make floors.

5. For Michael Gill,
A. dairy and honey from airlines could well be used to feed animals.
B. donating food is a sensible solution.
C. waste from airplanes should be incinerated or buried.

6. According to Magda Golebiewska, in EU
A. all waste is processed equally, no matter what its origin is.
B. airports mark waste bags with their origin.
C. the waste from inside and outside the EU is separated.

8. In the last paragraph, it is said that
A. not using disposable products would be a good solution.
B. the price of getting rid of waste is not going up.
C. waste volumes are being successfully controlled. 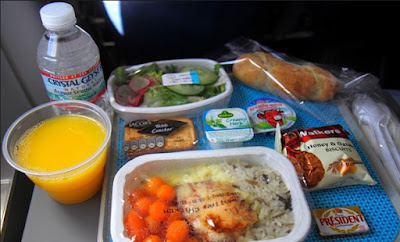