In this week's reading test we are going to use The Guardian article Seven top tips for driving long distances with children to practise the heading-matching kind of task.

Read the article and choose the heading A-I which best suits each of the extracts. There are two headings you do not need to use.

A - Asking the wrong question
B - Disconnect to connect
C - Divide the day in well-defined stages
D - Don’t say you’ll do something you may not be able to do
E - Get together with other travellers
F - In-transit activities
G - Leave early, go slow
H - Set great destinations
I - The great distractor

My wife and I had just bought an old motorhome online so  40,000km, 30 countries and one year later by trial and error and with many tears, often mine, we discovered the best ways to have a great family road trip.

1
After a week of solid driving north through the Norwegian fjords towards the Arctic Circle, my family staged a revolution by way of a sit-in, demanding a no-drive day. Revelling in this break, from then on we slowed down, ensuring we were stationary for at least one day in every three. On particularly long driving days, we left early, ensuring everybody was fresh, and arrived before the kids’ witching hour. We stopped regularly at parks or playgrounds, where, unlatched from their seatbelts, the kids ran free like puppies off leashes. This child-friendly pace of dawdling tea stops and long, lazy lunches created as much entertainment as the awesome destinations.

2
Armed with colouring and reading books and paper, and with no mobile internet, the kids started entertaining themselves. We sang silly songs, told stories, and sometimes they slept. Occasionally, we counted cows, castles or yellow cars through the windows. At these times I tried not to be game-competitive – there’s little dignity in screaming “I won!” at a two-year-old.

3
Being with my children 24/7 for an extended period, I discovered how food constantly simmered in their little minds. Promising it, making it, drawing it, from anticipation to devouring, food was the thing that stopped them from paying attention and focusing. Just murmuring the word gelato could produce well-behaved discipline an army sergeant would yearn for. We also maintained a spare crisp packet in the glovebox of the vehicle at all times, cracked open like a glass-fronted fire alarm, only in emergencies, which seemed to occur quite often.

4
Promises of climbing castles, eating food and petting zoo animals could tame even the surliest child. But the great parental trap, the ill-thought-out promise, was to be avoided. When I found there was no gelato in the High Atlas Mountains in Morocco and no Ice Hotel in Sweden (it melts in summer), the disappointment blowback was extreme.

5
“Has everybody been to the toilet?” seemed like a reasonable question at the start of each drive. Invariably, the kids said yes. Within five minutes of being on the road, however, the toilet concept sunk in, forcing an emergency pullover. We stopped mentioning it.

6
Driving for weeks towards the north pole became a pumped-up adventure once the kids knew they would visit Lapland’s Santa Claus and feed his reindeers. Turkey? Easy – underground cities. Oxford? The grand hall of Hogwarts. Involved in the upcoming stages of our journey, the children would chirp like excited squirrels, making the journey that much better.

7
No TV, internet, tablets or phones – it seemed like a good idea to reclaim “old-fashioned” family time and let the kids’ imaginations run wild. And it was – for a week. Soon we began to crave a hit of Google. But immersed in the rarefied air of each other’s company and discovering a new level of mutual attentiveness, we played games, lit fires, counted the bonging of church bells and connected as a family as never before. 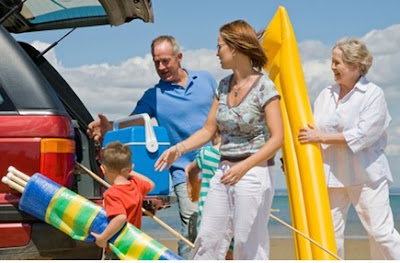