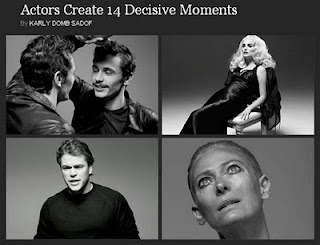 Self-study activity:
Get together with an English speaking friend, a classmate or a relative and discuss the feeling that each of the actors is conveying on each clip. Try to tell the visual story in your own words, describe what you are seeing on the video but figure out what happened before and will happen afterwards.

The 14 Decisive Moments may come in handy when studying the modal verbs for speculation:
Javier Bardem must be going through a crisis. He may not have been give a part in a film.
Tilda Swinton must have received very bad news.
Publicado por coordinacion.thats.eoi1z@gmail.com en 0:38