Click on the image to get to the article where you can find the answers to the following questions.

WHERE did the Civil War begin 150 years ago today?
WHEN did the Civil War end?
WHO came to this national monument over the weekend to re-enact the opening shots of the Civil War?
If there had been a government shutdown last week, HOW would it have affected the Civil War commemorations planned here?
WHY do some of the re-enactors quoted in this article see parallels between then and now?
WHAT did Vernon Terry bring to the commemoration?
WHAT “extremes” do many Civil War re-enactors go to to duplicate the experiences of soldiers in the 1860s?

(You might use Tony Horwitz’s 1999 article “Mine Eyes Have Seen the Coming of a Lot of Wacky Stuff” to help you find tips for re-enactors on topics like “grooming,” and “eatin’ and cussin’.”) 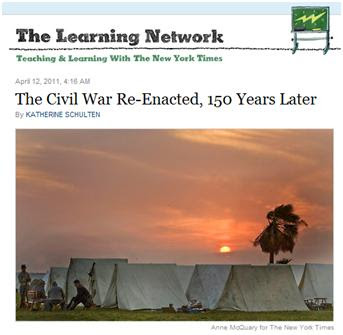